Be it board, computer or outdoors....
Games help distract from doing chores
Post Reply
37 posts

The forest bears and the flannel bears got to chat while we streamed the Snuper Bowl!

Unfortunately it wasn't a very exciting game - but it was impressive how Lee predicted exactly what was going to happen! She knew Tompa Bay would win, and at halftime she even predicted that KC would be demoralized by an interception - and then that exact thing happened. Wow!

Lee might very well have a mutant power of predicting what will happen in the future... cool!

Lee not only predicted Tompa Bay would win, she also dominated the prop bet wagers by a score of 18-15.

I can't believe that Tom Brady is actually retiring!

It seemed like every year the bears would gather to watch a Snuper Bowl and chances are Tom would be playing in it. In fact he appeared in 10 Snuper Bowls.

It just won't be the same without Tom on Snuper Sunday. Maybe he will come out of retirement to play in it next year?
"Thong-the-thong-thong-thong"
- the Thong Song
Top

All the bears are gathered on the couch of many blankets to watch this year's Snuper Bowl! 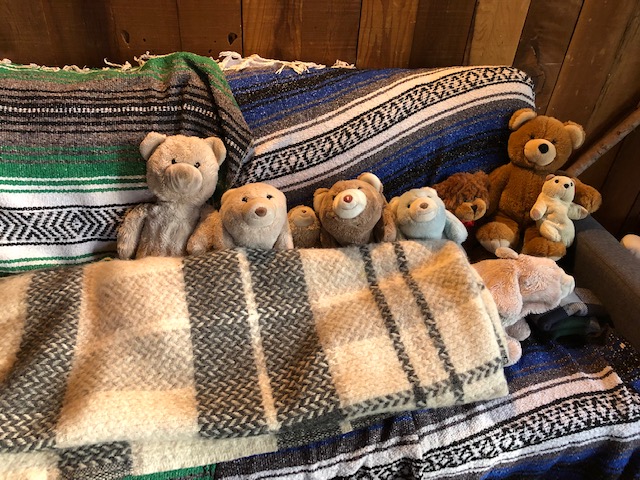 Lee is going to cook a very special Blue Apron for us... yeah!
"Thong-the-thong-thong-thong"
- the Thong Song
Top

Anysneech, I just wanted to log for posterity that I had a great lead in the March Madness pool this year thanks to my one true Villanova, but then they got bamboozled by Kansas in the semi-finals so Mom snuck in with the victory.

All in all, I was pleased with my bracket.

The Golden State Dubs are in the NBA finals which is very exciting because Lee lives in the Golden State. I heard there are some haters who think it is unfair the Dubs are so good - but to them I say you should respect the skill of Steph and enjoy watching a true master of his craft. It would be like someone complaining about my pancakes because they are too perfect and make other pancakes look like cow patties!

I do declare, I had not been paying close attention to the goings-on of the Warriors of late - so seeing a post by a young Mr. DJ was quite shocking to say the least. Who knew that my last pep talk would so rejuvenate the team and catapult them into the finals?

Watching the Warriors bring home another trophy would do this old monkey proud! (I am a monkey, right?)
Bunny Spotter of the First Order
Top

Huzzah Huzzah - or as you strange bears say, Fuzzah!

The Warriors have claimed another championship and young cub Steph has now truly become the King of basketball, being so rightly crowned the MVP of the Finals.

I hear that Duddles (the old scoundrel) somehow finagled multiple wagers on the series and has now won both a McFlurry and a Sloopys, whatever that strange word means!

As for me, I shall now return to the Ancestral Wakandan Savanna only to return to the realm of the bears when I hear rumblings of another Warriors' championship. Hear hear!
Bunny Spotter of the First Order
Top
Post Reply
37 posts