Build a fjord for Dave

Not all topics revolve around Schlop (but most do). Post your questions and comments that don't involve Schlop here.
Post Reply
62 posts

Dibs on Peanut Butter Cookie Dough Cacao Crunch!!!
"You have no life... Writing about Smurfs... GO EAT A MUFFIN OR SOMETHING!"
Top

Oh wait, we are talking about oats?

Un-dibs.
"You have no life... Writing about Smurfs... GO EAT A MUFFIN OR SOMETHING!"
Top

The bears have been mystified by the arrival of an ear worm who does not respond when given healing hugs.

Schlop is still working through his various antibacterial strains of hugs trying to find the right hug!

In the meantime, Snuffles volunteered to go with Dave to a Western Medicine Practitioner and see if there's a Western Medicine solution. Snuffles, who received his first Medal of Honor helping Dave recover from Chicken Pox, is ready for the new challenge!

Bears send hugs of hope! Let us know how it goes!
Top

It is a day to celebrate Dave and send fuzzy bear hugs his way!

Last year we were all together for this auspicious occasion and all the bears gathered around these presents!

But it was fun to have all the bears together! 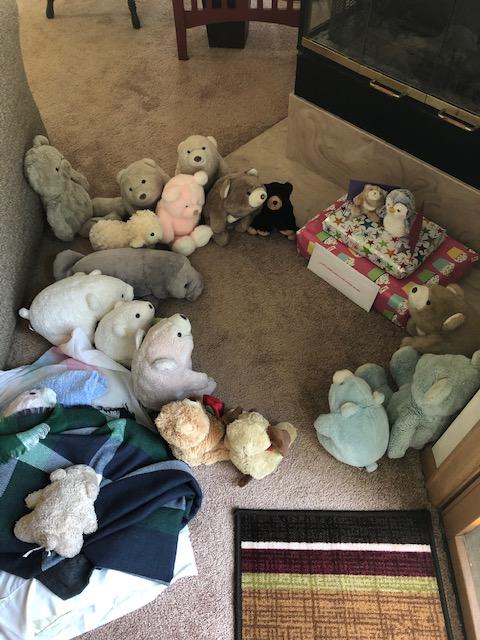 Hopefully the worst of the pandemic is over and we can be together soon!

In the meantime, bears eagerly await arrival of a card from SNEECHES since foodstuff-gifts are on the banned-list now, along with all other gifts, hoo hoo!

At least HUGS are not banned!! Sending extra HUGS!
Top

Schlop asked me to post a Happy Birthday message on his behalf!

Here's a picture of Schlop from last summer pondering how glad he is to give Dave hugs and read the Schlopabog together. 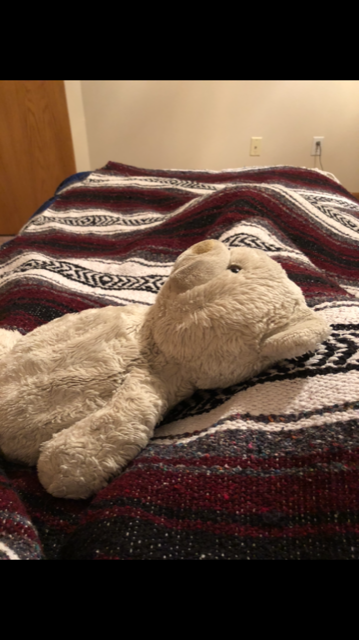 Oh dear, I'm a bit worried that I wrote you a LETTER but now it is DAVE'S BIRTHDAY but really it's just a LETTER because I MISS YOU so this is AWKWARD TIMING.

Anysneech, sending BIRTHDAY HUGS to DAVE in the meantime.

Here is a photo from last year where we four were hanging out and talking about how cool DAVE was! 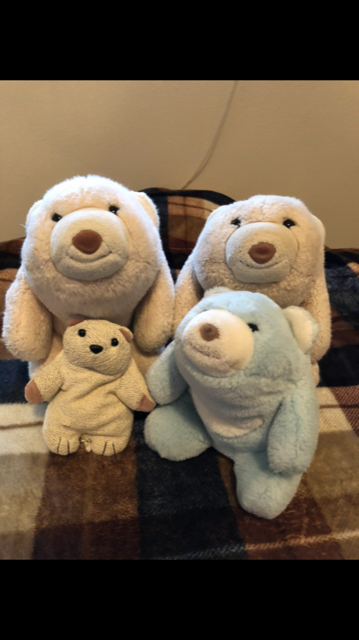 Dave always SNARFS at my jokes! Even when they aren't SNARFWORTHY.

I appreciate that.
Top

Dave took such good care of me and always made sure I am not creased and got naps on the rainbow pillow.

Here's a pic from a time we formed a real pile to talk about how much we like Dave! 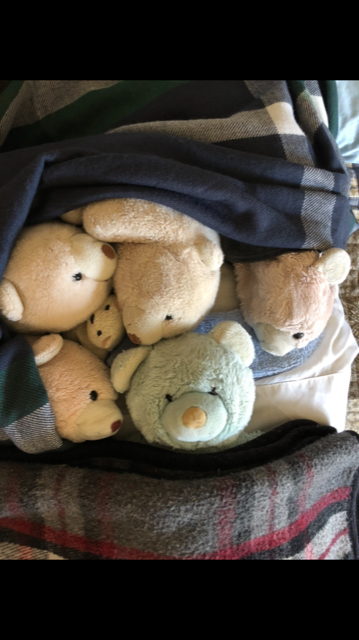 I can't wait to have Dave do the gentle nose-swipe and sing me the Frozen 2 lullaby again....
Where's Petri?
Top

Here's a throwback pic to the time we left Colorado and moved to the forest and camped along the way.

I remember we were all chatting about how much we appreciated Dave on this trip!

(Except Duddles was asking if he could have a wheat thin lik....)

But we all send hugs to Dave today! Happy Birthday! 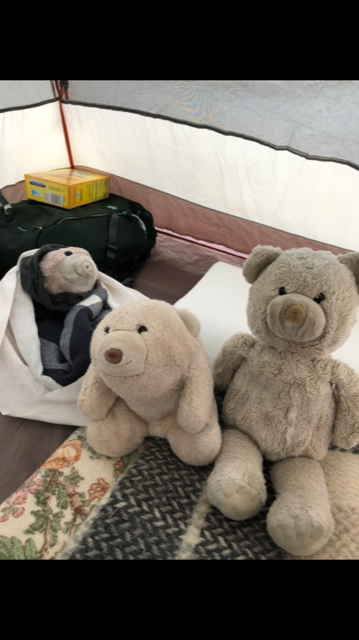 What are lock game visualizations, Alex.

A big day for Dave fans. Dave, with a tiny bit of assistance from MiniNibs, spent the week scrubbing Jeopardy! data and creating the coolest ever dataviz analysis of lock games!

There are trend lines, filters by people, size and shape widgets, and a secret feature that takes you to each individual game!

There are types of graphs we bears have never even seen that look so soft and flowy.

It was a huge undertaking and it has been celebrated by us bears and two guys on reddit.

Bears are in awe of all the time and energy that went into this. Especially because debugging wasn't possible through traditional means with javascript embedded in python and so all bugs had to be found using untraditional means!

Bears so proud to know Dave! So proud!
Top

Dave made a cool post mapping the locations of all Jeopardy! contestants and then some dataviz accounting for state population size to show where most contestants come from. https://www.reddit.com/r/Jeopardy/comme ... ontestant/

Some people were snarky and mocked the map for being only a map of where people live in the US, but Dave's honor was quickly defended by user david-saint-hubbins who jumped in to show that the 2nd and 3rd graphs account for that very nicely!

Then there was some confusion by dark-mode users who couldn't see axis labels, but that was quickly sorted out thanks to Dave!

Then some people decided to argue about the innate beauty of the dataviz and whether carets were the best symbol to use (Duddles thinks perhaps Dave should use carrots next time).

But some users were very happy to see their dot repped on the map! Others lamented not naming their small town and instead picking the nearest big town. It's so cool how many previous contestants hang out on this subreddit.

One guy got deep into the weeds about how to parse and validate the city name data and Dave got to explain how he had to aggregate inconsistencies like St Louis vs Saint Louis vs St. Louis and St. Looey and Saint Looey... oh wait, maybe not quite all of that, but you get the idea.

Anyway, bears remain SO PROUD of Dave for bravely putting out another Jeopardy! dataviz idea to the unpredictable and quick-to-snark trolls of reddit and for coming up with a cool idea and for it getting so much engagement and for wrangling this dataset and for figuring out how to map it in a cool way and for all 3 of the ways to visualize this data!

I am personally excited for Dave to do more of these and I will be here cheering him on the whole time!
Top

The forum updater is down, apparently it was running on the Antikythera mechanism which was still running on Windows XP and it finally gave up the ghost, so to speak.

So that means no one will hear me if I squeak into the void. Squeak Squeak!

Well, after we received Nibs Quest as Lee's bday present, the bar has been set impossibly high for birthday "experience" gifts. There's no way we can top that.

Lee and I had an idea back in January, but it would have involved a lot of new skills we didn't have so we decided to table it.

A few weeks ago we got a new idea that we thought we could pull off. We dove in and put about 20 hrs into it before realizing it wasn't going to work as planned. It was a tough blow for us!!

Lee tried to investigate a few pivots and ways to save it but nothing was looking good.

Then on Tuesday night we found a slight way that might work to save the project and BOOM- suddenly all our 20 hrs of work was salvageable and useful and things started coming together!

We've been working every night this week on the unblocked pieces and we're so excited about them. Hopefully we can wrap it up this weekend.

Now the hard part becomes staying mum until May 7!

Lee and I are currently in Las Vegas and sending BIRTHDAY HUGS!

The Forest bears like Dave a whole lot and wish him a very fuzzy day!

We spent the last month hard at work on our Last Duel cake and can't wait to give it to Dave tomorrow!

In the meantime, we are so glad we get to zoom with Dave and watch shows and do sneechwords and read books together!

I hope you have a FUZZY DAY with DAVE for his BIRTHDAY!

I like Dave because he shows us the SMORES CARD every time we ZOOM! And somehow it gets FLUFFIER EVERY TIME!

It's been hard to keep MUM about this CAKE we made so I'm excited we finally get to EAT IT tomorrow, PEACHES!!!

Dave always snarfs at my callbacks and makes me feel so fuzzy every time I'm on camera!

I miss living with Dave and hope to again one day!

Dave always makes sure my fur is nice and helps me find Petri and reminds me about Stockholm Syndrome and is always looking out for me.