It's about time we have a music section on these forums. We can't hold out any longer. Even if certain people don't have certain hardware required to hear sound....
Post Reply
20 posts

I just found out Vienna is doing a show in mid-december back at the Palace of Fine Arts, where we first saw her!

I got an email to buy tickets before they go on sale to the public- wow!
Top

Lee saw 2 amazing Vienna shows BACK TO BACK last night! It sounded cool!

And it sounds like songs from The Fourth Messenger might come out soon, which is Lee's dream!

But meanwhile, Vienna apparently mentioned that some of her songs are written as 'hug a teddy bear songs'!! She wrote an entire category of songs for us to get hugs to! Isn't that great?!!!

Nibs, is it true that Lee is going to see Vienna Sneech in a few days?

That's what I heard.
Answer: This character studied medicine, "knowing it would be useful in long voyages"

Vienna got the pot of gold

I heard that Lee saw Vienna and that Alex was there playing with his box but he was not very happy at all.

But then a magical leprechaun appeared and the leprechaun had a beautiful singing voice.

Also Vienna played the song Lee requested!
"You have no life... Writing about Smurfs... GO EAT A MUFFIN OR SOMETHING!"
Top

Vienna did an online concert and me and Sneeches watched it together at the same time!

Mini-nibs helped make a photoschlop of what it would have looked like if I was there with Sneeches: 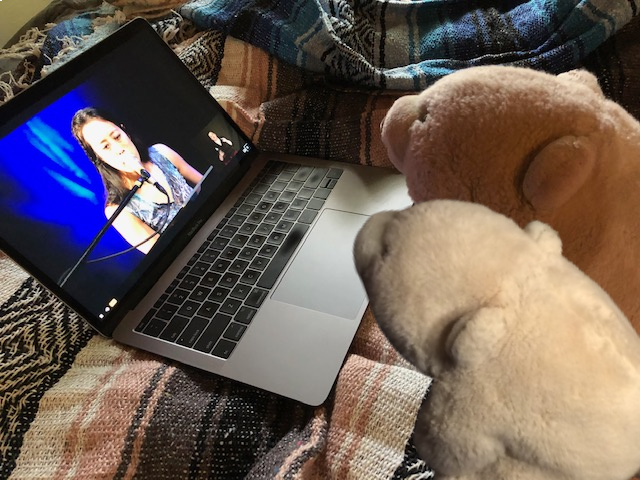 It was really great and she played City Hall and Both Sides Now by Joni Mitchell. Gulliver had requested "Now Three" but she must have run out of time - hopefully she will play that next concert!
Hurty flurty schnipp schnipp!
Top
Post Reply
20 posts